Individual rights vs. the common good

The United States of America’s Declaration of Independence prescribes three “inalienable rights” to all people, no matter who they are: life, liberty and the pursuit of happiness. Many more of these rights are guaranteed to Americans throughout the constitution, and the citizens have the power to amend these rights when need be. But when does the importance of the common good overshadow the substantiality of one’s individual rights? What exactly is the common good? This issue will be looked at through the lens of two different dilemmas that America has dealt with in the past and still deals with today, war and public health.

According to the Stanford Encyclopedia of Philosophy, “the ‘common good’ refers to those facilities—whether material, cultural or institutional—that the members of a community provide to all members in order to fulfill a relational obligation they all have to care for certain interests that they have in common.” Things that fit these parameters would be public health, public roadways, public parks, public libraries, public schools, civil liberties, public museums and cultural institutions, clean air and water, etc. The protection and maintaining of these things that fall under the label of the “common good” is essential to society—without these things, we wouldn’t have a well-functioning society. Therefore, it sometimes is necessary to make sacrifices for the common good.

America has had a long and complicated history with wars. The Sedition Act, a wartime act put in place to help limit negative speech against the government during WWI, was one of many acts put in place by the U.S. government during a time of war that violated the freedoms of Americans. The Sedition Act of 1918 is one of the most infamous examples of “government overstepping the bounds of First Amendment freedoms,” according to Middle Tennessee State’s First Amendment Encyclopedia. At the time, President Woodrow Wilson realized that morale on the Homefront was low and was looking for a way to diminish disapproval of World War I and the draft. This law prohibited types of speech related to the war or the military, making it illegal to “incite disloyalty” against the military, use or speak in any language deemed “disloyal” to the government, advocate for labor strikes or support countries at war with the U.S. This law is in direct violation of the first amendment, which specifically states “Congress shall make no law… abridging the freedom of speech, or of the press; or the right of the people peaceably to assemble.” The law led to the prosecution and arrest of over 2,000 people, with penalties being as harsh as a $10,000 fine or 20 years in prison. This bill was a direct attack on American’s freedom of speech, one of the principles that this country was founded on and an element that is essential to any democratic form of government. Without any type of discourse or difference in opinion, democracies turn into autocracies. The freedom to speech is arguably the most important right of all: without the freedom of speech, one would be not able to fight for any other right whatsoever. The harm of this bill outweighed any perceived benefits it had, causing a large wave of xenophobia to stretch across the United States. The people targeted by this bill were mainly pacifists, anarchists and socialists. According to the History channel, many of the immigrants in the United States, particularly Irish, German and Russian immigrants held these ideologies, causing their loyalty to the United States to be openly questioned by many. In this case, this law enacted by the United States government was a complete encroachment of the freedom of speech, and the perceived benefit to the “common good” that came from it was not comparable to what individual freedom was taken away.

Public health has become a part of our everyday lives over the last two years. The COVID-19 pandemic has caused many different people to have many different approaches on how to contain the virus, some rooted in fact while others are not as much. The main two ways recognized by most infectious diseases groups to help control the spread of COVID-19 have been masks and vaccines, which have both been hotly debated. According to an article from the US National Library of Medicine, this is not a new occurrence. “The first tensions over the scope of public health and the acceptability of its measures arose during the fight against infectious disease in the nineteenth and early twentieth centuries,” author Ronald Bayer says. Matter of fact, the very specific issue of mandatory vaccination has been brought up and decided upon by the Supreme Court in the past. Henning Jacobson, a Cambridge, Massachusetts pastor refused to get a smallpox vaccination, which was mandatory in the state at the time. Jacobson, who had a bad history with vaccinations, believed that his family had a hereditary trait which would cause him to have an adverse reaction to any immunization given to him. Anyone who refused would be forced to pay a $5 fine, which Jacobson ended up being prosecuted for. The case eventually reached the Supreme Court in 1904. Jacobson believed that Massachusetts’s law violated his fourth amendment rights, but the Supreme Court disagreed. According to Oyez, “The Court held that the law was a legitimate exercise of the state’s police power to protect the public health and safety of its citizens. Local boards of health determined when mandatory vaccinations were needed, thus making the requirement neither unreasonable nor arbitrarily imposed.” In this situation, the benefit to the rest of the public coming from mandatory vaccination outweighed any of the risks to the person receiving it. The mandatory vaccination was decided upon by a local health board, making sure that the vaccinations were needed in Jacobson’s city of residence at the time. In the case of vaccinations and masks, the amount of risk involved with these tools to help stop infectious diseases is so small, yet the benefit coming from it is so large. It is also proven that mandatory vaccinations do not violate the constitutional rights of a person in the U.S.

The common good is and will always be more important than the rights of the individual. We, as a society, have the ability to deny our neighbors and reject these sacrifices to the common good for our own benefit, but we also have the option to each accept small sacrifices to serve the common good and to help advance the quality of life for others. This doesn’t mean that we can’t ever think about ourselves or be a selfish, but it is important to keep the other in mind while making decisions that will affect the lives of a large group of people. In closing, it is important to keep the other in mind, because without the other, it is impossible to have a functioning society.

Everyone has told me junior year is the hardest. Classes, the ACT, preparing for college, jobs, sports, and combining them all seem to drag down the r... 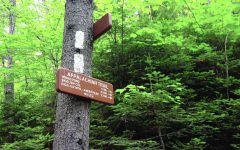 Charlie’s stories from the trail