Gia Stang, junior, has reached the finish line of her cross-country season, and is now preparing to dive into the upcoming swim season. The transition between the two sports comes with anticipation, self-reflection, and a newfound sense of hope.

Stang is not competing at districts, so her cross-country season ended Oct. 7. With the season’s end, Stang realized she is not fully satisfied with how it went.

“I’m sad because next year is my last year and I could’ve done better this year, but it makes me feel motivated for next year because I get to do better,” Stang said.

Last year as a sophomore, Stang did not have a normal cross-country season due to covid, which is partially why she feels she did not perform her best this season.

“I wasn’t used to running so I was out of shape and kind of forgot the feel of the sport,” she said.

Stang hopes that with the proper conditioning (optional practices two times a week before try outs in Nov.) she will be able to get the feel of the sport in time for her swim season this year.

“I would like some time off, but I know I’ll be in a much better position if I use the time that I have in between sports to prepare myself for swim.” she said. Conditioning is not the only aspect of the transition between sports that Stang is taking advantage of.

“This year I’m going into swim with a whole season of cross country under my belt”, she said. “I had the endurance during cross country season that I’m going to bring into the swim season.”

Stang knows it will take a lot of effort to prepare for the season because of the high
difficulty level she experiences as a varsity swimmer, including one inevitable setback.

“I feel anxious and a little hesitant for the start of the season because most of the
swimmers on the team swim for a club team outside of school and I don’t.,” Stang said. “The other swimmers have all year to practice and I’m just starting off.”

Despite this setback, Stang feels there are greater benefits that come with the difficulty of being on the varsity swim team compared to running for JV cross-country.

“It’s more rewarding because we are pushed much harder in swim than cross country, like we do stuff in the mornings and nights and the weekends,” she said.“It’s a big commitment.”

Stang enjoys running more than swimming and will continue to run during the swim season as it helps her endurance in both sports.

“It’s much easier to get into running because you can run anywhere and you can practice anywhere, and it’s not as hard to adjust your techniques.,” Stang said. “For swim it’s harder because you have to be at a pool and there’s more technical aspects to it, like your arms and your head have to be a certain way.”

Although a significant difference lies in the technique between the two sports, Stang feels it is easy to compare swim and cross-country because of their more important similarities.

“They’re both mentally and physically challenging because they’re very independent sports,” she said. “You can’t fall back on your team.”

Even though Stang does not depend on her team athletically, she does in other ways. The bond she has with her cross-country teammates makes it bittersweet to end the season and move on to a different sport.

“I’m not as close to them when I’m not in cross country because it’s hard to stay in touch when you’re not seeing them after school every day.” she said.

Stang feels the atmosphere with her swim teammates is much more competitive.

“I sometimes have to fight to stay caught up with everybody who has been competing for club,” she said. “They are going to bring the competitiveness into the school season which gets stressful.”

Given the competition on the team, Stang also recognizes the camaraderie and support she receives on the swim team.

“We all know the struggles and how challenging our sport is so we can understand each other, and all acknowledge that everyone is trying their best through their ups and downs.,” Stang said.

Compared to her teammates, Stang considers herself the slowest swimmer on varsity. Despite this, she is working toward earning her third chevron on her letterman jacket this year and staying motivated for the season.

“Even though I’ve had a rough start to the year with cross country I’m motivated to break through my past mind sets,” she said. “Now I’m an upperclassman and I want to be a role model.”

Although the upcoming swim season is daunting for Stang, she is ready to become a stronger and more confident athlete.

“I hope I can prove myself wrong this year,” she said. 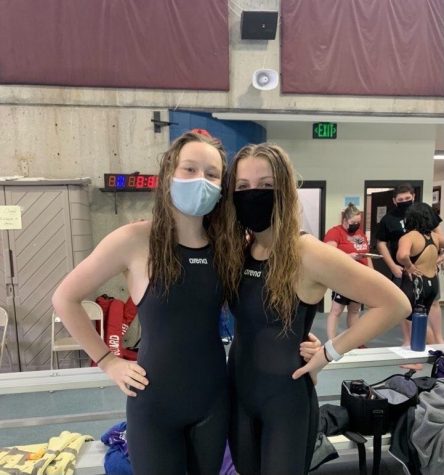