New band director Chiyo Tauernicht has been a teacher for 15 years. “I always thought it was a dream job,” she said of Central.

Omaha Central has a new band director, Chiyo Trauernicht. She was born in Osaka, Japan but mostly lived in Chiba, Japan. Trauernicht lived in New York from the age five to seven due to her father’s business but moved back to Japan. When she was 22, she moved to Nebraska. She is married to Brian Trauernicht, and they have a 19-month-old son, Connor. They also have adopted two dogs, Charlie and Callie.

Trauernicht’s primary instrument is the flute, though she also plays the piccolo, alto flute and piano. The piano was the first instrument she learned how to play, starting when she was 5 years old. She played the flute in her middle school band. While studying to be a band teacher, she took a technique class which allows her to teach all band instruments.

Trauernicht co-teaches instrumental music, which includes concert band and marching band. She also co-teaches jazz band, percussion sectional, orchestra and beginning guitar. All these classes are open to all grades.

She got her first degree from Tokyo University of foreign studies, where she was an English major and got a bachelor’s degree in English and a teaching certificate in secondary English. She also has a master’s degree in American history.

“After arriving to Nebraska, I attended University of Nebraska Kearney, and I did teaching certificate studies in K-12 music education,” Trauernicht said.

She also did a three-summer program and finished her second master’s degree in wind conducting. The program was run by American Band College in southern Oregon.

“It’s a very unique program for band teachers who don’t want to quit to go back to school to get a master’s degree in music,” Trauernicht said.

Trauernicht has many years of teaching experience. While she was attending Kearney she worked as a part-time elementary general music teacher and taught a Japanese 101 and 102 course. Before coming to teach at Central, Trauernicht taught at Otte- Blair middle school for 14 years as the band teacher

“Back then I loved middle school, was not thinking about a job switch or anything,” Trauernicht said.

When Trauernicht was a first-year band teacher she decided she wanted to learn from veteran band teachers, so her mentor gave her a list of names to contact about shadowing. On that list was Pete Wilger, a former Central band director. Trauernicht came to Central and watched and learned from him.

“I was so impressed by the high energy level and diverse and inclusive school culture that I can already feel from the classroom interactions and energy in the hallways,” Trauernicht said.

She remembered Central as a great school with great students, so when the position opened up, she jumped on it.

“I always thought it was a dream job,” Trauernicht said.

She was ready to challenge herself in a new position, new grade level, new city, and new environment.

“As an immigrant and as a woman of color, I felt like I wanted to be a great role model for my students at Central, if I can be. That is my down the road goal. So, I want to do a really good job to prove myself,” Trauernicht said with a smile on her face. 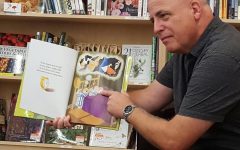