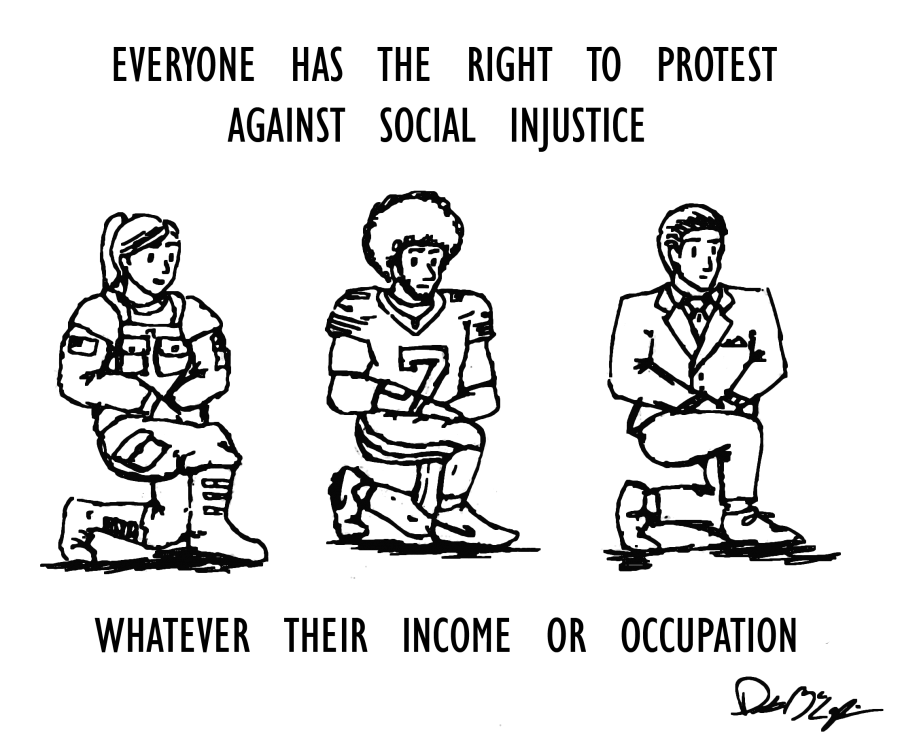 The First Amendment is the most widely interpreted piece of law in the Unites States, and it is the spark that ignites the fire of heated debate and argument. In this instance, the argument comes in the form of the right to protest, and more specifically how Colin Kaepernick started a whole new conversation by choosing to kneel or sit during the national anthem.

On Aug. 26 Kaepernick was playing in a preseason game versus the Green Bay Packers and chose to sit during the national anthem in order to protest racial injustice and police brutality. His initial statement as to why was, “I am not going to stand up to show pride in a flag for a country that oppresses black people and people of color.” Kaepernick chose to do something in order to bring to light the problems that are happening in this country and the people who are being wronged in communities across the United States.

It is amazing how one act and one protest has now sparked debate across the nation, from the big stages of the NFL to the Friday night lights of high school campuses. In a society that is incredibly complex, there are so many sides of this issue to cover. From the arguments about respect for first responders and military, to the responsibilities of athletes as well as Constitutional rights for citizens of this country.

The first argument is obviously the main catalyst behind this issue, that when an athlete chooses not to stand for the national anthem they choose not to stand for the men and women that defend our country. However, people seem to forget what those same men and women actually defend. They do not just defend our country and our people. They defend the Constitution of the United States, which means they defend the rights one has as a citizen, such as the right of free speech and protest.

The military gives Colin Kaepernick and other athletes’ the right to protest like they have. They do not do their job so that others can worship them and salute them when they want to. It is a thankless duty and they serve their country; service meaning they do not expect anything in return. Those who are currently serving in active combat probably do not care about the anthem. The military has a job they are currently focused on.

In a way, Kaepernick was respecting the armed forces by actually using the rights they fight to defend. He chose to say something and at least attempt to create change instead of sitting on the sidelines and doing nothing. Now admittedly, Kaepernick sitting on the sideline is what you could call “slacktivism,” where some advocates for something without actually doing anything beneficial to support their cause. However, Kaepernick did pledge to donate the first million dollars he earns this season towards helping with the problem of racial injustice, whether that be through community support organizations or some other outlet. While he did choose to donate money after the fact, at least he is trying to do something instead of just talking.

However, the situation with Colin Kaepernick brings up an interesting question that we must ask the rest of the athletes who protest. There is no debating that every citizen that lives in the United States has the right to protest. But do they have the credibility and justification to protest? Or are they just protesting to protest and not actually trying to change things?

For example, an athlete like LeBron James certainly had the credibility and justification to say something during the ESPYs about racial injustice and athletes helping their communities. James supports his community near Akron, Ohio through his foundation, the LeBron James Family Foundation which does numerous things for children such as gives them rides to school, provide financial support for their education and much more. He also has a show on CNBC called “Cleveland Hustle,” which provides support for people who want to open their own small businesses.

These things gave James credibility when he spoke out and it made everyone listen. Not only did his fame help his legitimacy but so did his service to his community. So when other athletes choose to protest during the anthem, we have to ask if they donate not only money to their communities but also their time. Revisiting, rebuilding and encouraging communities to become better. Every problem, whether it be racial, social, financial or personal must first be solved from within someone before he or she can attempt to solve problems in the outside world.

Athletes have an increased responsibility to use their fame and fortune to do good. However, when we as a society choose to hold them to that standard, we cannot stop the boundaries of sports and politics from overlapping. Some people complain when sports and politics combine. Yet those people probably get upset when an athlete does not act like someone you would have in your home or in your community. When we ask our athletes to get involved in social issues and politics, they are free to speak their mind. People cannot get picky and only want athletes to speak when it agrees with their values or what they have to say.

Nobody calls Muhammad Ali a thug when one reflects upon his social impact upon society. He was one of the many athletes at the front of the Civil Rights Movement, with acts such as speaking against the Vietnam draft. Ali’s words and Kaepernick’s are eerily similar. About the Vietnam draft, Ali said, “Why should they ask me to put on a uniform and go ten thousand miles from home and drop bombs and bullets on brown people in Vietnam while so-called Negro people in Louisville are treated like dogs and denied simple human rights?” He chose not to serve his country. Sure, he might have been called names back then. But now, do people call him unpatriotic? Do people say that he is sympathetic to terrorism? Do people call him a thug? No, they call him a hero and a leader for civil rights. So why are athletes being criticized for standing up for what they believe in?

These athletes are advancing and continuing the conversation when today’s society will talk about it only when a tragedy occurs. They are getting people to pay attention to these issues in their towns and communities. Are they perfect? Absolutely not. Sometimes these athletes cross over into the gray area of protesting and insulting. But they are doing more than a lot of other people are willing to do to create change in society.