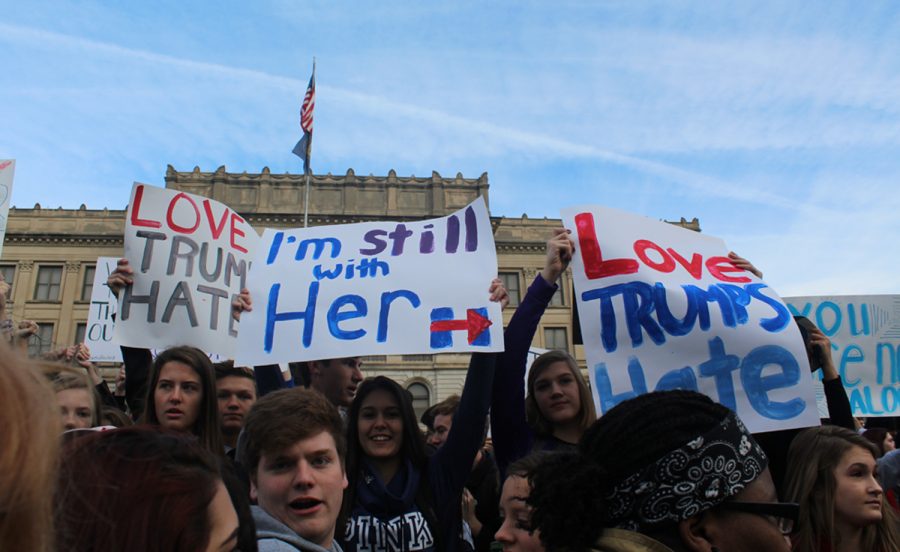 The Register takes an investigative look into the sounding of the fire alarm during the walk-out on Nov. 11.

While some students walked out voluntarily during the rally on November 11th, just three days after the presidential election, the one thing that forced everyone in the building outside was the fire alarm. Right after students who were upset and worried about their future walked out to rally, the fire alarm sounded and the crowd became filled with over two thousand students and staff. Reasonably, students that did not want to go outside and join the crowd were upset.

Principal Ed Bennett, when asked if he believed a student pulled the alarm, was resounding. “Absolutely,” Bennett said. “I immediately jumped on the walkie and said, ‘We’ve got to figure out who that student is and move forward with the harshest possible consequence that is dictated by the code of conduct. That would not have been okay, because it forced people to go outside who didn’t want to be outside.”

However, after checking out the situation, Bennett came to the solution that it was not a student who pulled the alarm. It was a malfunction, caused by dust that gathered on a smokehead. The smokehead is located on the third floor, three side, directly above the vending machines.

In order to come to that conclusion, Debra Bolas, head building engineer at Central, had to work with the Omaha Fire Department to test and check the school’s fire system. “We assumed somebody had pulled the fire alarm,” Bolas said. “So we were looking for that instead of a dirty smokehead.” She, along with fire department personnel, checked the fire panel only to find a clutter of messages and warnings on the fire panel, located on the first floor, three side. If it was a student, it would have shown up on that fire panel as a pull station, and staff would have been able to piece together within minutes where the alarm was pulled and who pulled it based off security camera footage.

One reason why the fire alarm may have gone off was because of the repairs being done to the current fire system. One might have seen alarms are of their sockets around the school, and some of the work being done could have contributed to the malfunction, according to Bolas. She said that it is completely possible that a malfunction that would trigger the fire alarm could happen again, just because of all of the construction going on around the school.

While the timing was incredibly lucky, there were some pros and cons to the situation. According to Bennett, the obvious con was that students who did not want to go outside and protest were put in a position where it looked like they were supporting the activities. “I did not like at all that they were forced into feeling that way,” Bennett said. However, after reflecting upon the events, there was a hidden pro. “The way the fire truck parked itself on Dodge, in proximity to the police cars that were further east on Dodge, kind of created a buffer in the street,” Bennett said. “It forced the cars into those far south lanes of Dodge, so that even though most of our kids who were outside weren’t on Dodge, if they had come out into that first lane, they really weren’t in danger of being run over or hit by a car.”

Bennett understands that the coincidental timing could be hard to believe for some people in the public. He reiterated that staff would not compromise the safety of his students, as that is one of his top priorities as principal. “[The public] wants to say that the school is out of control, or ‘I’m sure it was a student who [triggered] it,” Bennett said. “I haven’t measured but I think the ceilings are twenty feet high. There’s no way. We’ve looked at the cameras to see who was there, there weren’t students who were trying to set it off. It really was the system.”