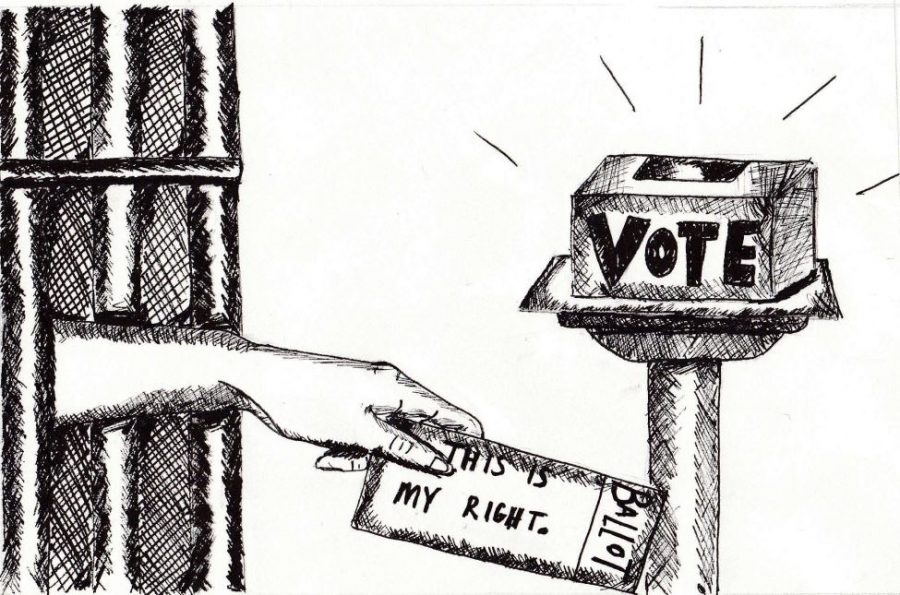 Prisoners should be able to vote

With the presidential election coming up, the topic of voting rights has been in the news a lot lately. Many of these news stories are about felons gaining back their right to vote after getting out of prison. But we should question why these prisoners have their right to vote taken away in the first place. Every U.S. citizen over the age of eighteen should be able to vote, even if they are incarcerated.

The idea of prisoners being allowed to cast a ballot may seem far-fetched to many Americans, but it’s actually the standard in many parts of the world. This includes much of Europe, Kenya, Indonesia, Canada and dozens more countries.

Currently in the United States, prisoners are disenfranchised in all states but two. Vermont and Maine are the only places in the U.S. where prisoners can vote, and it’s regardless of their crime.

There are a plethora of reasons why prisoners should be able to vote. One is that they are still American citizens. Being behind bars doesn’t change that. Representatives make laws that effect prisoners just as much as every other citizen. It only makes sense that inmates should get a say in choosing who their representatives are.

Inmates also need to be able to have a voice to advocate for themselves, which voting would provide. Prison conditions in the U.S. are inhumane and overcrowded. If inmates could vote, that could give politicians incentive to care more about fixing our prisons and making them about rehabilitation rather than profit.

The only big voice in American politics that has called for prisoner voting rights recently is Bernie Sanders. Last year at a CNN town hall, Sanders affirmed that he supports allowing incarcerated people to vote. In a follow up op-ed, he also touched on felons in the U.S. being disenfranchised. He wrote, “Our present-day crisis of mass incarceration has become a tool of voter suppression. Today, over 4.5 million Americans — disproportionately people of color — have lost their right to vote because they have served time in jail or prison for a felony conviction.”

One common argument against felons and prisoners voting seems to be picking the worst incarcerated people and then asking if they should be able to vote. For example, politicians against prisoner voting often question if people like the Boston bomber should be able to vote. But the answer is yes. Even horrible people should retain voting rights; because that’s what voting is – a right, not a privilege.

The government should never get to pick and choose who can vote based on whether they’re deemed a good person or not. If they do so, then the elections can never be fully free because of their influence. Additionally, there are plenty of awful people who aren’t imprisoned, and they are still able to vote.

The U.S. claims to value democracy, but if they truly do then all citizens over the age of 18 should be allowed to vote. Anything less is voter suppression.