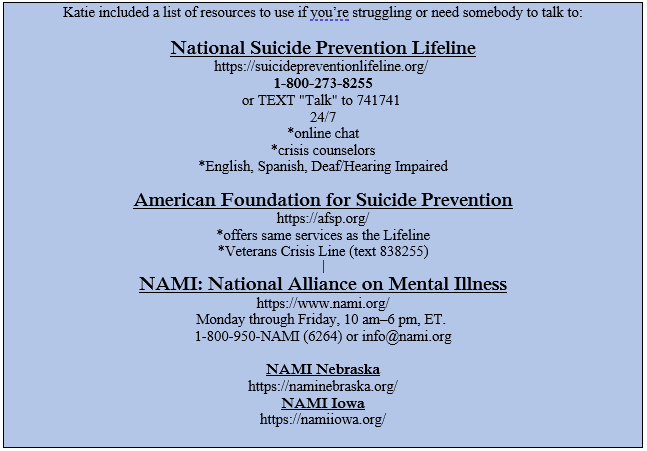 Covid-19 has affected many things, implementing new norms into everyday lives such as quarantining and mask mandates around the world. Though there are many things Covid has impacted, there are some things that aren’t necessarily visible, but are just as prominent and important as the others.

“My clinical focus is with adolescents and adults who are afflicted with severe and persistent mental Illness, [such as] schizophrenia, bipolar disorder, major depressive disorder, personality disorders, obsessive compulsive disorder and others,” Peck said. “I facilitate crisis intervention and suicide prevention and postvention.”

When the pandemic first began, employees at Peck’s agency were given the ability to work from home if necessary and were encouraged to quarantine if they had any exposure to the virus. However, Peck states, “based on the limited information we had towards the end of February and beginning of March, we knew that our community would need to have some services in place, even when the rest of the country was on lockdown. Fortunately, I have several people on my team who were willing to continue to see our clients and treat people in crisis situations face-to-face.”

Every state across the US has experienced increases of mental health disorders, substance abuse disorders, behavioral health disorders and child abuse, as well as emergency response and adults reporting symptoms of depression, anxiety, suicidal ideation and suicidal planning. The Substance Abuse and Mental Health Services Administration, (SAMHSA,) reports “the negative health effects [of shutdown and social isolation] are potentially long-lasting and very consequential to individuals and their families.”

“Since March of this year, outpatient services have significantly increased at the agency, especially towards the latter half of the summer,” Peck said. “Without such an awesome team, we would not be able to maintain the pace and workload associated with a career in a helping relationship.”

The CDC has released data stating “40.9 percent of adults reported at least one adverse mental or behavioral health condition,” and that suicide ideation had gone up by 11 percent.

“I have done more crisis response in the past eight months than I have, in total, the past eight years,” Peck said. “What this tells me is that the general public was not/are not prepared for a public health emergency, like a global pandemic.”

There have been significant spikes specifically in things such as suicidal ideation, child abuse cases and intimate partner violence. “At one point, I was doing some type of crisis intervention work three to four days a week,” Peck said. “It’s terrifying that people feel so helpless, so hopeless that they become clinically depressed to the point where suicide becomes an option.”

Covid has caused many things such as worry about general safety, isolation, loss of jobs/income, loss due to illness or death and some not having access to food or other essentials. These are all things that are putting a strain on people and negatively affecting mental health. “People are ill-equipped to deal with the stress and pressure of a global pandemic,” Peck said.

“Please, please, please reach out! You are not alone,” she said. “There are plenty of local and national supports that anyone can use, for free, 24/7/365. If you are in an immediate crisis, call 911 or go to the nearest emergency room for help.”