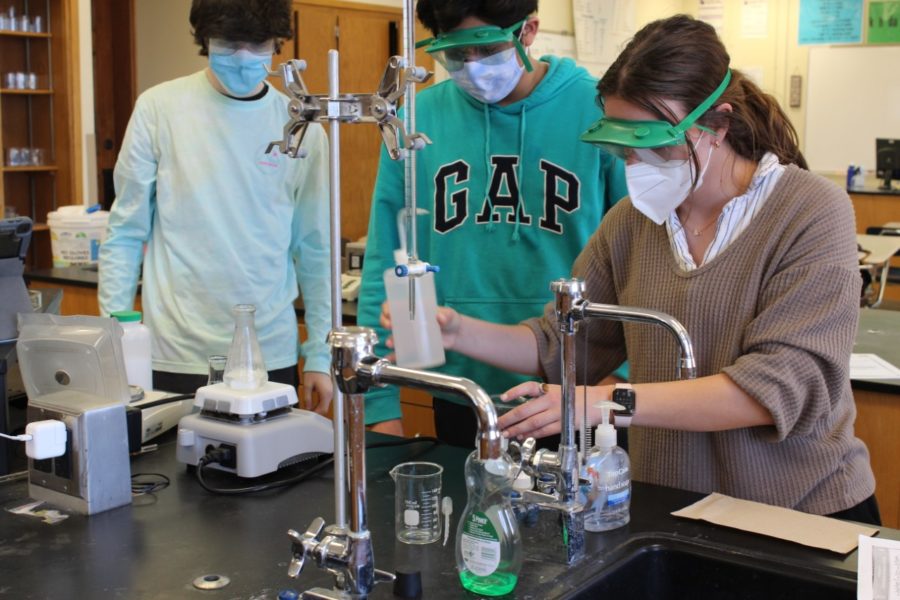 Science teacher Alexis Madsen started as a new teacher two years ago. Since then, she has faced a lot of challenges, but through it all, she has tried to work hard for her students to improve as a teacher.

After finishing her student teaching in New Zealand, Madsen began her career in the fall of 2019 as Central’s freshman physical science teacher. It started out rough.

“I learned that I’m a lot more sensitive than I thought I was,” she said. “With freshmen, they’re kind of learning their limits for the first time when they walk in. They want to be cool, because they’re the newbies. So, there’s a lot of attitude, and they’ll say things to you that are maybe a little inappropriate.”

She said she remembers that for a while, when students would say some of these things, she took it personally. By November, though, she felt she was getting into a groove, responding to students’ comments with witty remarks and taking greater control of her classroom with some help from her students.

She continued to feel she was improving throughout the third quarter, right up until the pandemic hit and everything shut down.

“In that first week, rather than focusing on curriculum, I was just really sad, and I knew that some of my other kids were going to be sad as well,” Madsen said. “So, for that week, I actually just made phone calls to every child.”

She asked how they were feeling about not coming back, if they were scared, and if they had everything they needed. That gave her a gauge of how everyone was doing, and she then continued teaching as much as she could within the constraints of one assignment per week. At the end of the year, she felt she had missed out on the full experience of a first-year teacher.

“We never really got a true goodbye, we never got a nice end-of-the-year celebration,” Madsen said. “I feel like I never got to get that final check mark of ‘I did it, I survived my first year of teaching.’”

With this feeling, she continued on to her second year of teaching. When it was announced that school would be online again, she felt better about the situation, and knew what she wanted to do.

“I’m a pretty big curriculum person,” she said. “I want kids to be super engaged, and I want class to be relatable to what they do in everyday life.”

Her main concern was about getting kids to be engaged while they were all online. She did this at the start of the year by getting kids to debate things like ‘what is a sandwich?’

“It was amazing to see how personalities came out,” Madsen said. “That got not only the initial engagement going, but the initial relationship building piece as well. It was a whole lot better than it was during last spring, because I actually got to talk to the kids through a screen, rather than just through email.”

After that, she started doing labs in the classroom while students watched at home and discussed the experiment with her. From there, her focus was on getting students to pay attention and participate in class.

“I wouldn’t say I had anxiety as far as ‘Am I going to do a good job building relationships?’” Madsen said. “It was more like, ‘Am I going to make a child feel like they’re actually learning and feel like it’s worth their time to log in everyday?’ My big thing was ‘How can I take this to the next level of engagement for students?’”

Madsen says she’s continued to keep that in mind as school has moved into the hybrid model of learning, with some students attending school in-person and some attending online. Although, at times, it has been a struggle.

“I never want to leave a child behind or have them feeling like they didn’t get an experience,” she said.

She talked about a lab where she used s’mores ingredients to explain stoichiometry and limiting reagents to her students. At the end, she gave all the in-person students s’mores, then turned to the virtual students and gave them ‘virtual s’mores,’ telling them that if they had the ingredients at home, they should make s’mores for themselves because they deserved it.

“I’m just trying to get into a habit of being empathetic, inclusive, and realizing that there are some kids who are at home, and they deserve to have my attention too,” she said. “It’s how the new world is working, you just have to adapt.”

On top of all this adaptation, Madsen has also taken over teaching the IB Chemistry class this year, which has been another type of challenge as she has had to figure out how to teach students who understand content at different paces.

“I think people forget that gifted and talented children can get just as bored in a classroom,” Madsen said. “If they’re bored, they’re going to check out too. They don’t want to sit and listen to something that they already know, or that they understood a lot faster.”

She’s handled this by giving the students who learn the content faster more difficult questions, while she works with students who need a bit more explanation.

“It’s been a little intimidating, but honestly, it’s been the best thing for my teaching, to push me even further,” Madsen said.

Because of her new course load and the fact that the pandemic prevented her from finishing her first year of teaching in-person, Madsen says this year has felt strange.

“This whole time, I’ve still felt like I’m a first year teacher, if I’m being honest,” she said. “So I think, come this May, I’ll finally get to feel like, ‘Now I did it, now I did my first year of teaching.’”

And next year, Madsen is looking forward to being one of the teachers involved with the Freshman Academy.

“With Covid,” she said, “Failure rates have been so high, depression and anxiety—as if that wasn’t high enough already in the United States—escalated even more, and so I’m hoping that this Freshman Academy will be great for younger people who are just coming in. You’ll have four teachers who, if there’s a problem, we’ll check in with you, we’re here to be like your cool aunts and uncles. Hopefully, we can get kids feeling super motivated and that someone’s there for them.”

This is something she wished she’d prioritized last year, when the pandemic started. Although she made phone calls to students in the first week, she wished she’d kept that going, and now, she wants to make sure she keeps that in mind throughout this year and next.