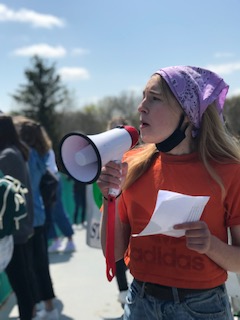 Students for Sustainability held a climate strike on April 24 at Memorial Park. The group of young adults protested on behalf of many things, including pollution, fossil fuels and even at times state officials. But the overarching theme of this protest was like many of the conversations rising in the United States. The group decided to make a statement about racial justice.

The first half of the protest was held in the park’s grass. During this time, leaders on the organization’s board took turns giving speeches about the relevance and need for the conversation about race when discussing climate. Protestors were invited to speak, however they felt moved, about why they were present at the strike. Pictures were taken and laughs exchanged in the passionate seriousness.

Chlöe Johnson, a member of the Students for Sustainability board, then began the march to the bridge overarching Dodge Street. Johnson held a megaphone as she shouted chants to which the protestors responded. The crowd of nearly 100 people walked and chanted up to the top of the bridge where they waved signs as cars passed and honked in support.

Students from all over Omaha commented on the reason for their attendance. A similar trend of urgency to take action and spread awareness filled the crowd.

Zoey Mullins, a sophomore at Central, was present at the strike. “I think it’s really important to stand up for what you believe in and make sure we have a livable planet for the future, for kids and for us. I think it’s everyone’s responsibility[to be here] to make sure we can keep our planet beautiful. I think it’s important for everyone to do their part.” Mullins also spoke of racial justice. “There’s a lot of disparities. I think [climate and racial justice] are of equal importance.”

A young adult also commented on their belief of the importance of a community gathering. “I think it’s really cool when people can come together and make a collaborative effort, because it’s like one of those things where everyone says to respect the earth but no one‘s really doing much about it. I think when we all come to these gatherings it’s easier to [identify] what we’re fighting for, these are the specifics of what we want to accomplish,” They said, “ and that’s what really matters, the effort that you actually put in to make a change. I think we all kind of feel a responsibility to do our part.”

“[Intersectional environmentalism] is important so we’re not ignoring black and brown communities when we’re focusing on these issues,” a UNO student commented.

As the protest came to a close, two girls from Marian High School discussed ideas similar to other students. “I definitely felt a responsibility to be here as someone who cares about the environment and where it’s headed in the future. I think it’s the right thing to do as a young person in today’s society,” one Marian girl said.

She finished saying, “As someone who’s a black woman in today society, I think there’s a lot of issues that we have to focus on, so it’s really hard for people of color to focus on just because there’s so many other injustices that we are facing. The more people that are involved the more the movement will be a success.”

The second girl held similar values. “It’s important for our future generations that we all come out and support. I think that is important as a feminist and as an eco-friendly person that we do all we can to help others and the environment.”