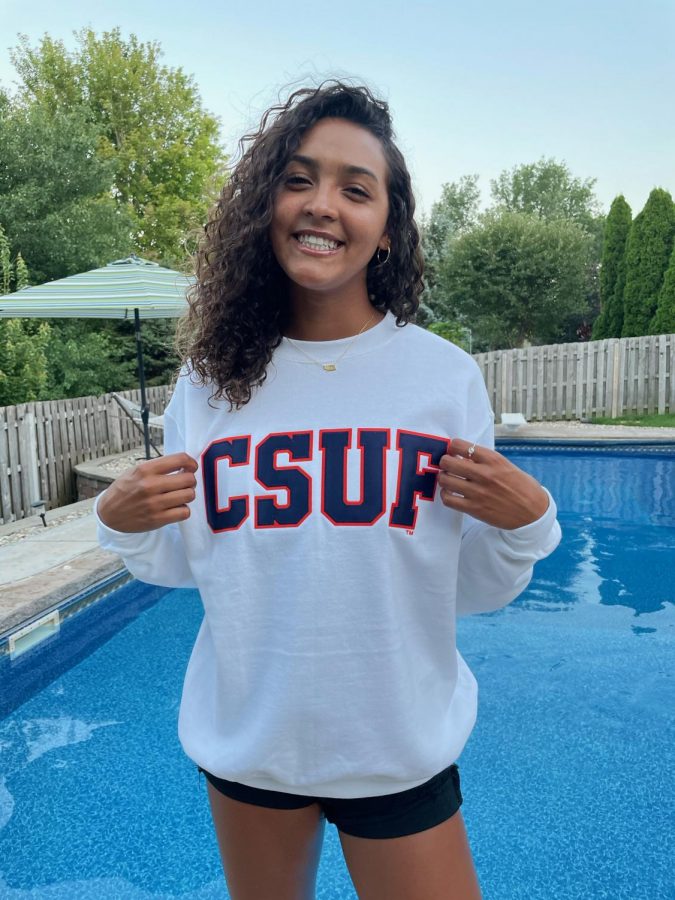 Senior Bianca Martinez will be playing volleyball at Cal State Fullerton in the fall.

Senior Bianca Martinez made the ultimate decision many high school athletes dream of: committing to a D1 university for her sport. The senior volleyball player and track star began playing her beloved team sport in third grade and began club volleyball in the sixth grade.

Martinez started track in eighth grade at Davis Middle School. She participated in other sports, but they did not stick with her as much as volleyball and track did.

“I played basketball and I did swim. I did swim my entire life, but I stopped because club volleyball is at the same time, so I chose volleyball over swim,” Martinez said.

During her sophomore year of high school, Martinez started to seriously consider playing volleyball at the next level.

“I got my first college interest at one of my club tournaments in January. It was from Concordia University, and that’s when I really realized I wanted to play volleyball in college, and I really could,” Martinez said.

The coronavirus pandemic complicated the beginning of Martinez’s recruitment process, but she began to contact colleges in November of 2020 thanks to her new club.

“I changed clubs to Elite and that’s when the recruitment process was much more serious for me,” Martinez said.

Her club had her contact at least 100 different schools, and she had to categorize them into three distinct categories.

She sent an email out to all those schools, including information about herself, game film, and an indicated interest in their programs. After that, she waited for colleges to reply.

“Some replied, some didn’t. I would talk to them, and I would go on phone calls, and they would watch my games,” Martinez said.

In February of 2021, Cal State Fullerton, which was one of Martinez’s level schools, emailed her back and the process went from there. After a few weeks of talking, Cal State gave her an offer, and then Martinez had to make her decision.

Even though she had not formally decided yet, Martinez’s heart was set on Cal State from the beginning. She had a great connection with the coaches and loved talking to them on the phone. She visited the campus over the summer.

“In June I took the visit to Cal State Fullerton, and I absolutely loved it. I loved the coaches so much. We hung out with them, we ate food, it was literally the best thing ever,” Martinez said.

The volleyball player is also an avid lover of track and field, and she is trying to decide if she wants to do track at Cal State.

“Instead of doing volleyball conditioning with my team I would just do track season. I know my parents really want me do track, and I want to, but I know it would be a lot of work,” Martinez said.

In terms of majors, Martinez is not sure what she wants to pursue yet. She does know that she loves her current community and returning to it would be a perfect opportunity.

“Recently, I’ve thought about coming back to Central and teaching and being a coach, because I love Central so much and I’d just love to be in that community,” Martinez said.

For younger athletes who crave the opportunity to play the sport they love at the next level, the star volleyball player has some advice to share.

“Make sure you reach out to schools you want to go to…send emails, make film, because that is the most important thing,” Martinez said. “Just work really hard and don’t let anybody tell you that you can’t do anything.”