Block scheduling will be coming to Central next year, making it the final high school in OPS to adopt the system. Although many have expressed their unhappiness about this decision, the change from a nine period schedule to a block schedule will be an unimportant one in the long run.

For those unfamiliar, block scheduling is a system where, instead of having eight or nine classes a day, a student has half their classes one day and the other half the next.

The statistics surrounding block scheduling are murky. There are two types of block scheduling: A/B (the two-day schedule that Central will be adopting) and 4/4 (a schedule where students take four of their classes in the first semester and the other four in the second).

Most of the studies conducted on block scheduling have been done either on a combination of the two, or just on 4/4 scheduling. However, few of these studies are reliable or recent, despite the fact that block scheduling is not all that new to education.

The most conclusive evidence in favor of A/B block scheduling comes from the School Superintendents Association (the AASA), which claims that under A/B scheduling, grades improve and the number of students who make the honor roll increases.

The AASA also claims that about a third of schools in the U.S. use block scheduling. Although this does not guarantee that block scheduling is a perfect system, it does mean that it is used across the nation, with some success. Without further data, the only arguments to be made on this subject are theoretical.

Central has not yet announced some of the precise details about how block scheduling will work, such as whether each day will contain four or five blocks, how classes that were already on a block schedule (like some science classes) will be changed, and how the new advisement classes will change.

What is known about the change, according to an article from last March by the Register’s Jaden Cheloha, is that each student will have a twenty-five minute lunch period each day during third block, in one of three slots.

This is one of the most obvious benefits of Central’s block scheduling plan. Right now, many students do not have a lunch period, either because they have to take so many classes that they don’t have space in their schedules, or because they would rather spend the time taking an elective than at lunch for a full period.

With a built-in lunch, students would be given a time set aside for them to eat or at least to have a break from classes. This would be a great boost to the mental health and overall well-being of students.

This, however, is the only area where block scheduling has a clear structural advantage over nine-period scheduling. Looking at the two scheduling types as a whole, they each have their own benefits and drawbacks.

Block scheduling’s longer periods allow teachers to give instruction for longer at one time, whereas nine-period scheduling limits continuous class time because of the far shorter periods. That said, there is a case to be made that teenagers’ attention span is better suited for a shorter class, so, although teachers may prefer the greater instruction time, it may not end up having a positive effect on students.

It is also worth noting that teachers may be more inclined to stop instruction early in the longer class periods that block scheduling provides. At the same time though, they would be less inclined to let a class period go to waste by getting off topic in a lesson or simply not getting started fast enough, which occurs from time to time in the shorter class periods of a nine-period schedule.

The way a nine-period schedule allows students to have the same classes each day has its benefits too. Students can get into a routine with greater ease, and they are going to remember homework assignments and test dates better with that regularity. When a student misses class, it is relatively easy for them to catch up again, whereas with block scheduling, missing one class is equivalent to missing two in a nine-period schedule, which can make things more difficult.

However, having classes every other day is not without its own merits. Students have more variety in their days instead of going through the same patterns all the time, and they have more time outside of class to complete their homework, even if more work might be assigned to them.

Now, when it comes to how this change will look specifically at Central, it is worth noting that block scheduling, if it is implemented in the form of four-block days, will come with the major drawback of cutting out an entire class from each student’s schedule, limiting the number of credits students can earn or make up in a year.

This problem, however, is not inherent to the block scheduling system, but to how it is being implemented. OPS could easily make each day at Central consist of five blocks instead of four, or they could continue to offer zero hour classes or some other solution to allow students to take more classes.

This is the real problem with block scheduling—not the format of the schedule, but the way it has been introduced. Parents, teachers, and students do not feel that they have been a part of the decision-making process while the district has changed the way education in Omaha will look. This is an important issue that will have to be worked out over time. However, it is not a problem with block scheduling, but with the district.

Perhaps if Central were the only high school in OPS to be making this change, the difficulty and stress of it all might mean that it wasn’t worth it. Six other high schools in OPS now have block scheduling in place, in addition to several other middle schools. It is ridiculous to believe that Central is so different from these other schools that block scheduling would work there and not here.

Central is special for many reasons, but its nine-period schedule is not one of them. Changing the schedule will not change the school’s history, the school’s teachers, or the school’s students. It will just change when the bell rings.

Block scheduling should be blocked 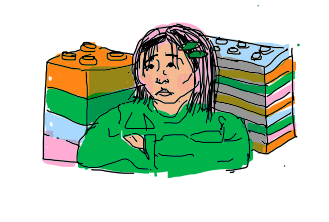 Rumors have been floating around Central about a possible change to block scheduling for the 2022-2023 school year. Central is the only school in the district that does not have block scheduling and we should keep our nine-period day for the foreseeable future.

A block schedule includes four 90-minute class periods a day, along with a 45-minute lunch period. Central’s current schedule allows students to take nine class periods if they want, allowing students to take plenty of different electives. The opportunity for nine periods is especially important for students in the IB program: the IB diploma program requirements occupy eight periods, so the ninth allows IB students to take an elective that they care about. If we did not have a nine-period day, I wouldn’t be able to take newspaper- one of the classes that means the most to me.

Everyone learns in different ways. Some people thrive in block scheduled classes, and that is wonderful. The other 6 OPS schools can cater to students who enjoy block scheduling, but it’s important for the district to be able to support students who learn differently. It’s unfair and hypocritical to force all students to conform to one schedule, especially when we know that some students thrive with the traditional mine period schedule.

I have always struggled to focus during block periods. Ninety minutes is a long time to be in one subject, with one teacher and the same people. By the end of block periods, many students have completely lost focus and teachers struggle to maintain control of a classroom of bored, disengaged students.

Changing a schedule seems like a low priority compared to every other issue facing Central students and staff right now. Students and staff have experienced grief, difficult transitions and a total upending of our school customs and ways of life. We see the effects of these difficult transitions in the number of fights in the hallways and the struggle to get back to the school routine. We should allow students and teachers the opportunity to return to normal instead of forcing yet another transition on us.

I enjoy walking around during passing periods.  I appreciate the separation it gives me between classes and the opportunity to visit with friends and teachers I see on my way to my next class. Eight times a day, I love the opportunity to stretch my legs and walk. The nine period day works for many Central students. In fact, it’s the reason many people choose to attend Central over other OPS schools. It’s not fair for the district to force every high school student to learn the exact same way. We need to stop the advance of block scheduling on Central.