Body image and High Fashion Model in the 21st century

Self-perception is one’s impression of the style and allure of one’s own body. Someone’s perception relies on the standard that has been set by the general public. Everyone has their philosophies on what a common body type should look like. Due to promotions and motion pictures, the image of an “ideal” woman’s body is altered.

As thin women’s bodies started to appear in magazines in the mid 1920s, the rise of eating disorders began. Today’s ultra-thin ideal in modeling was much curvier and womanly in the 1990s, where as the “Twiggy” aesthetic was popular in the 70’s. Going further back, women in paintings and portraits were conveyed as curvy through the Renaissance era. A woman’s shape that is “on trend” depends on a variety of social and cultural factors that change over time.

When we speak of models, the body specifications expose the prejudiced body requirements that the fashion industry has set. Western and Indian culture allowed young girls and women to feel less confident in their own skin. In the 80’s, women’s beauty and body image wasn’t considered if it didn’t cater to the ideas of conventional beauty. When you think of a fashion model, what do you think of? Slim, tall, and fair skinned right? Plus-sized females were rejected based on their size, and the diversity in models were slim to none.

Thankfully, as time went by, the fashion industry has made their models diverse, with a range of sizes. There has been such an enormous difference from how prejudiced the industry once was in the 80s and 90s to now where models of different races and body types can come together and show off the amazing clothing pieces designers have to offer.

From a very young age, students are told that reading will make them smarter and that they should pick up books instead of TV remotes in their free ti...

Overrated or worth the read- The Seven Husbands of Evelyn Hugo

This year, I have a New Year’s resolution to read at least 25 books. Seeing as it is only the ninth day of January and I have already finished my tw... 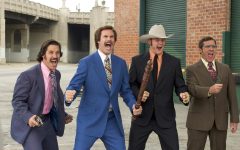 How Adam McKay writes a comedy