Third grade science class: the birth of the most valuable lesson of my formative years. We were just beginning our unit on amphibious creatures. My teacher surprised us with an interactive learning opportunity. Tadpoles were brought into the classroom for students to take care of. Each child would take them home for a weekend and return to school on Monday with observations about their behavior.

First, a note about myself before observing the tadpoles: as a young girl, I was not accustomed to experiencing change. For a substantial portion of my childhood, I lived in the same house, attended the same small Catholic grade school, and hung around the same close group of friends. I played one position on my soccer team and ordered the same sushi rolls.

I was content with this existence. More than that, I sought nothing outside of this existence. Security was my main priority, and my routine made me feel secure. Growing up sounded scary, and I had stubbornly decided that it was not for me. However, my comfortable self would soon discover that there is something inherently beautiful about changing, even if the thought of it is frightening.

Back to third grade science class: To be frank, I was disappointed with this classroom pet. I was expecting to study some exotic poisonous dart frog or a Northern crested newt, but no. Just some average tadpoles. All they do is swim around and eat algae, I thought. Although underwhelming in the moment, these little tads were about to teach me more than any dart frog could.

When it was my weekend to watch the tadpoles, I set the tank in my room and left them for the night. I dreamt of my polliwogs, desperately hoping they would thrill me in some way. My wish was granted the next morning, but not in the manner I had expected. I was awakened by the most vulgar smell that had ever graced my nostrils.

My immediate assumption was that I had killed the tadpoles! Yet when I peered into the tank, I saw no deceased polliwogs floating in the water. A good sign, I thought. I wrote down my first observations, starting with “smells like dead fish”, and went on with my daily activities.

The smell had only increased by the next morning. At this point, I was certain something was rotting within the tank. But upon further scrutiny, I noticed a peculiar change. Instead of perceiving a tadpole, I was observing a tiny frog. Seemingly overnight, metamorphosis had overtaken the life within my habitat.

It was a beautiful transformation to witness. A tadpole, just gaining an understanding of his place and purpose in this life, was forced into this process of change. The process may have been putrid and gross, but the result was fascinating: a frog, the next step (or jump) in life for this young amphibian. In a way, my initial observations were correct. The tadpoles were dying, but it was not the end of their lives.

Rather, it was the beginning of living how they were meant to live. In this moment, I realized the importance of change. Although it may seem wrong and overwhelming at the time, experiencing change is crucial to finding out who I am meant to be. Growing up and changing should not be seen as losing parts of former life, but rather a means of gaining new experiences that contribute to personal growth.

Now, as the high school chapter of my life is ending and the college chapter is beginning, I constantly remember this lesson. I am ready to embrace changes that come my way, because I know they will only make me a stronger person. The most unexpected path may take me where I am meant to be, and I look forward to embarking on that journey. 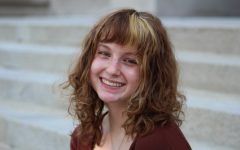