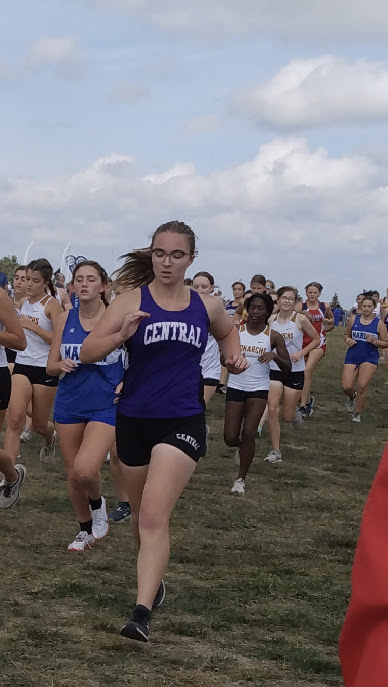 Elana Elder has been a part of the track and field and JV cross country teams and will be joining the girls wrestling team during her high school career. She has participated in these sports to stay in shape and to have the ability to meet new people.

“I am not a particularly good runner, so I don’t do it to be competitive. I do it for the community of it, everyone who does cross country is really nice, they are lovely people so it is really fun to spend that time with other people and you get to meet a ton of other people. Also, it is a good way to stay in shape. It’s really hard to find time to exercise unless other people tell you to do it” Elder said.

Elder has been on the cross-country team for two years, her sophomore year and senior year. She would have participated her junior year but there was no team due to Covid-19.

The experience of being a part of this team has impacted her in many ways. Not only has she met and became friends with many people, but she has also become a better runner and runs during her free time.

“If I have less time, I run four miles but when I have more time, I run between six and seven miles” Elder said.

Now that it is Elder’s senior year, she has begun to reflect on the people she has meet and the memories she has made.

“I loved all of our meets; they are generally really fun. One of my favorite memories is from my sophomore year, our final race was at Metro so at Papillion South La Vista and it was snowing during our last race. I very vividly remember that. So that was really fun. Also, we had team dinners which are always so good because they are usually Olive Garden and their pasta is so good” Elder said.

Being a senior, she is planning for the future, she hopes to get into her number one school, George Town where she will study to become a lawyer. She is thinking about focusing on Civil rights or Immigration. Elder does not plan to run on a team when she is in college but she plans on continuing running on her own.

Elder has had a great time being a part of the JV cross-country team and wants to leave a message for future cross-country runners:

“Have fun, eat a lot, make sure you drink a lot of water because so many cross-country girls don’t drink enough water and it is really unhealthy so make sure you are drinking a lot of water. Just have fun with it, do your best. It’s not always about winning, it’s just about getting better yourself, just trying your hardest”