These Violent Delights: the right way to retell Romeo and Juliet

These Violent Delights is a Romeo and Juliet retelling written by Chloe Gong, a Chinese- born New Zealand author. The story takes place in Shanghai in the 1920s where a blood feud between the Scarlet Gang and the White Flowers divides the city. The story centers around Juliette Cai, a nineteen-year-old Chinese girl who is the heiress of the Scarlet Gang and Roma Montagov, a twenty-year-old Russian who is the heir to the White Flowers.

When violent deaths start to appear throughout the city of Shanghai that are not the results of the blood feud, Juliette and Roma decide to pool their resources and work together. They must learn to put aside the blood feud and their blood-soaked past in order to save the people they love and the city they will inherit.

Although the story takes place in Shanghai, Gong does an excellent job adding in multiple language and cultures keeping the story as accurate to what Shanghai was like in the 1920s as possible. Within the story there are at least five languages spoken: English, Russian, Shanghainese, French and Korean. The different languages enhance one of Juliette’s issues that Shanghai is no longer a city for her and her people. It has been overrun by white people trying to change them.

Gong did an excellent job at taking the story of Romeo and Juliet and making it her own. She modernized it yet kept it historically accurate. She added politics, racism and the struggle of being a part of the LGBTQ+ community in a time that was not accepting.

She kept the story about love and family but then added much more. There was a larger focus on the important of duty and culture. Gong did a beautiful job highlighting Juliette’s inner conflict with having a modernized way of thinking but also trying to keep her Chinese culture alive.

Overall, Gong did a great job of making a story about love and family into something more. She made the characters into complex people, with deeper conflicts then just being in love. She made the plot into more than just two family’s hatred by making it more relatable.

“These violent delights have violent ends. And in their triumph die, like fire and powder, which, as they kiss, consume.” Romeo and Juliet, Act II, Scene VI

Don’t miss out on the second book of this series, Our Violent Ends. 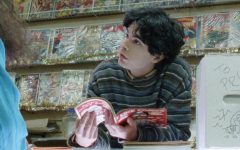