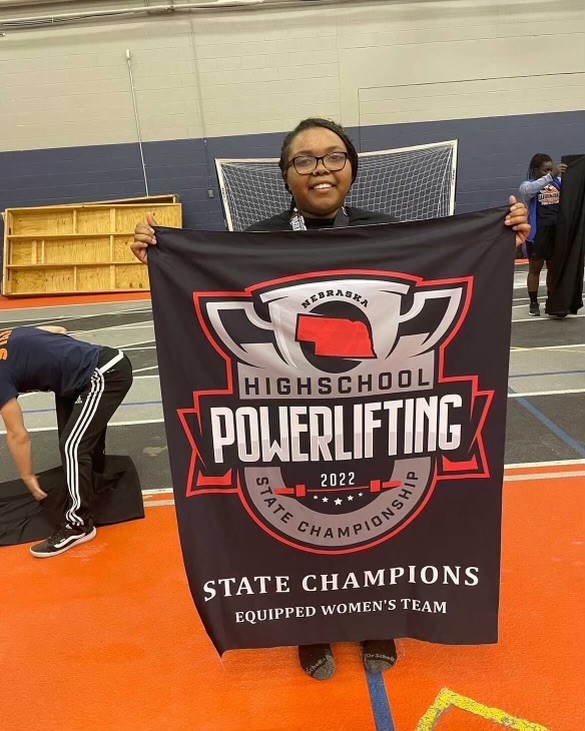 How a sophomore went from rookie to state champion

Ke’ljha Hadley started powerlifting around July of 2020, when she joined Big Kent’s Gym. “I had no intentions of becoming a powerlifter, I just wanted to stay more active during quarantine,” Hadley said.

This year Hadley has broken a total of four lifting records, her most memorable being her 500-pound squat in Central’s gym. She is now the number one female powerlifter in the state. Her team is also number one in the state.

What allowed her to break this record was her mindset. “Going into the meet I knew exactly what I wanted to do, and that was squat 500, so I put all the negative thoughts away and told myself I could do it,” Hadley said.

Going into a meet she has to make sure her mind is clear. She does this by going to bed at 9:30 the night before, breakfast usually two hours before lifting, lots of energy drinks and music. “The only thing on my mind is completing my lift.”

“Every time you’re in the weight room, you have to remember why you started in the first place. Over 90 percent of this sport is mental. If you don’t have a good mentality, you will never accomplish what you need to,” she said.

Hadley’s motivation comes from knowing where she started. “When I lift now, I think back to my very first lift and the feeling of accomplishment [I felt].”

“My mother Joy Hadley is definitely my number one support,” Hadley said, “she has never missed a meet and is always there cheering me on. She’s always making sure I’m pushed to my limits, reminding me to go above and beyond. When I’m lifting, I think of her words ‘You can do anything you put your mind to’.”

Hadley also believes her coaches and teammates have been a huge part of her success. “Without them cheering me on, I would have no adrenaline while lifting.”

Her achievements are ultimately a result of nonstop training. “Placing first was possible because of the hard work me and my teammates put in every single practice, along with the support of our coaches. Without Coach Baker, we would not be state champions, and I would not be number one in the state. He gives me drive, even when he’s hard on me.”

Being a girl in a male dominated sport isn’t easy, which Hadley can attest to. “They’re times you’re compared to a male lifter because they can lift more, or they’re times you might outlift a male lifter, but people will have excuses such as ‘She’s shorter so it’s easier,’” Hadley said.

“It develops a different type of drive when you’re lifting. Knowing that very few females lift encourages you to show them that you can do it, regardless of if it’s mostly boys or not!”

Hadley plans to powerlift after high school. At the moment, she would not like to announce any offers until her junior year.

“Some advice I would give someone starting powerlifting is to never give up. It’s going to get hard, there are days you’re going to want to quit,” Hadley said. “But you can’t, because in the end it’s going to be worth it. My coach once told me it’s not about where you start, it’s about where you finish.”